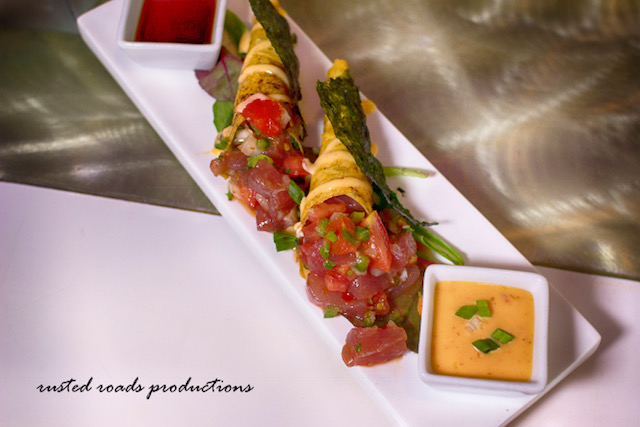 [Original article may be found here.]

Every time you look up, your wine glass has been refilled. Every time a plate is emptied it disappears and another takes its place.

There is no asking for a clean fork, another wine list, a dessert menu. The server saw you drop the first fork, knew you’d want another bottle, could tell you’d saved room for something sweet.

Just when you think service is dead, along comes BLANC.

This magical sliver of a restaurant opened in the longtime Oyster Shell space in Cypress Square in south Fort Myers in April.

Chris Whitaker and Chef Jean Claude Roge are at the helm. The former helped found, and still owns, the neighboring Blu Sushi. The latter cooked at acclaimed restaurants on Captiva, Sanibel and Fort Myers for more than two decades.

At BLANC, Roge roams the slim dining room in white-linen pants, his silver-white hair pulled back in a messy ponytail. It’s his artwork that graces the walls, his flavors presented on a well-curated menu of appetizers and sharable “almost entrees” that are, size-wise, somewhere between tapas and lunch portions — meaning you’ll need more than one to be full.

At least a half-dozen employees roam the 34-seat dining room — waitresses, food runners, a hostess also clad in all white. But what could be chaos is instead clockwork, a harmonious flow of people and plates.

Three cooks crowd into the small, open kitchen. Wrapped in a stainless-steel bar set with cream stools, it’s all but unrecognizable from its Oyster Shell days, as are the dishes coming out of it

Broiled scallops and chowder have been replaced by robata-grilled prawns and one of the most luscious, over-the-top French onion soups in town.

Half melting gruyere, half richly caramelized deliciousness, it’s almost too cheesy — if that were even a thing.

Ruby cubes of tuna are heaped into phyllo-dough cones that crackle between your teeth. Bread Jenga is as fun as its name implies, the toasted sticks of brioche stacked atop a pool of cheese sauce you end up licking from your spoon.

There are still oysters, these ones fried in a puffy batter or swathed in buttery Hollandaise.

Vegetables, though, are where this kitchen shines.

Beets are cut into wee wedges and fried into fuchsia tots to be dipped in Roge’s spicy aioli. Brussels sprouts are glazed in miso, then sautéed till the little leaves turn into earthy chips. Artichokes hearts shine tangy and bright in crisp, greaseless fritters.

An orange-blossom Hollandaise pools beneath a fillet of salmon, its edges crunchy from the robata grill. Pork belly is sous vide for 12 hours, then dusted in five spice and seared into perfect cubes. Wagyu sliders give some respect to the format, the juicy burgers cloaked in a velvety cheese that tastes like a mild brie.

That cheese is white, to match the walls and the tables and the soft leather banquettes. An icy take on Key lime soufflé is just as white, as was the viognier that Roge so rightly recommended for us one night.

“Can I get you anything else?,” the waitress asked after the last swigs of viognier had been swigged, the last sips of espresso sipped.

It was the first time she’d had to ask. I looked around, contemplated another plate of artichoke fritters, then shook my head and smiled.

The bill appeared — coming to about $50 per person including wine, desserts and tip. In the moment, it struck me as too little. But that’s the magic of BLANC.

Jean Le Boeuf is the pseudonym used by a local food lover who dines at restaurants anonymously and without warning, with meals paid for by The News-Press. Follow the critic at facebook.com/jeanleboeufswfl or @JeanLeBoeuf on Twitter and Instagram.